During the entire month of Ramadan, special prayers called Taraweeh are conducted daily by Muslims after every Isha Prayer. The word Taraweeh or Tarawih is an Arabic word that means To rest and relax.

Most Muslim Communities perform Tarawih Prayer at night after Isha Prayers during Ramadan. Traditionally, a Hafiz (memorizer) of the Quran leads the prayer. He recites the Quran in small portions, in proper sequence, every night and completes the recitation of the whole Quran before the end of the month of Ramadan. Every Muslim who attends such prayers regularly gets the opportunity of listening to the whole Quran in a month.

The recommended break between Taraweeh prayer is after each set of four Rakah. Muslims of different regions observe these breaks with different acts of worship.

However, no Hadith book mentions any recommended Dua during these breaks of Taraweeh Prayer, including the Dua commonly read by Muslims in several Mosques. Following Dua is commonly known as the Taraweeh Dua:

A thorough search of the Hadith, Tafseer, and Fiqh books did not reveal a single mention of this Dua anywhere as Taraweeh Dua or any Dua/Dhikr.

One should be aware of the fact that there is no Sunnah or recommended Dua for Taraweeh. One can simply engage oneself in any Tasbih, Durood, Dhikr of Allah, or one can simply remain silent during the Taraweeh break.

However, if one wishes to recite the Taraweeh Dua, then it is permissible as long as one accepts that it is simply permissible (Mubah) and not Sunnah or Mustahib (recommended).

‘One night Allah's Messenger (S.A.W.) offered the prayer in the Mosque and the people followed him. The next night he also offered the prayer and too many people gathered. On the third and the fourth nights more people gathered, but Allah's Messenger (S.A.W.) did not come out to them. In the morning he said, "I saw what you were doing and nothing but the fear that it (i.e. the prayer) might be enjoined on you, stopped me from coming to you." And that happened in the month of Ramadan.’

Hadith clearly shows that Taraweeh Prayer is not Fardh or Wajib (obligatory) but offering it is Sunnah Muakkadah [(confirmed Sunnah of Prophet (S.A.W.)] and comes under Qiyaam al-Layl (night prayers)].

"Whoever establishes prayers during the nights of Ramadan faithfully out of sincere faith and hoping to attain Allah's rewards (not for showing off), all his past sins will be forgiven."

Hadith shows the importance of Qiyaam al-Layl during Ramadan and since Tarawih comes under this category, it shows how much Allah loves prayers during the night. So offer Taraweeh Prayer and please Allah and fulfill this great Sunnah of Prophet (S.A.W.).

Offering Taraweeh prayer in congregation (for men only) is Sunnah of our Prophet (S.A.W.). (Sahih Bukhari: 1129)

When Tarawih is Offered 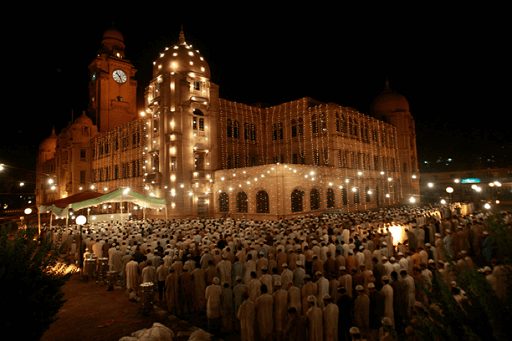 Tarawih Prayer is performed only during Ramadan. Taraweeh Prayer begins from the evening of sighting of Ramadan Moon and continues throughout Ramadan till the Shawwal moon is sighted. It is offered after Isha Prayer but before 3 Rakah of Isha Witr Prayer, which is also prayed in congregation during Ramadan only.

1- Taraweeh Prayer is one of the gifts of Ramadan and it is performed by Muslims during the holy month of Ramadan.

2- Taraweeh Prayer is not Fardh or Wajib (obligatory). According to many scholars and teachings of Sahabas [companions of Prophet (S.A.W.)], offering it is Sunnah Muakkadah [(confirmed Sunnah of Prophet (S.A.W.)] and comes under Qiyaam al-layl (night prayers).

3- Offering Taraweeh prayer in congregation (for men only) is Sunnah of our Prophet (S.A.W.).

5- Taraweeh Prayer consists of 20 Rakah (2x10 units) with small breaks after every 4 Rakah.

6- Taraweeh Prayer is offered as a normal Congregational Prayer with intention of 2 units and following the Imam.

7- After completing 20 Rakahs, 3 units of Witr Prayer is offered in the congregation.

Stay on top of your Salah with Athan